Showing all 7 results, including child brands

The Art of Precision

Precision engineering, innovative design, and visual aesthetics are embodied in the products from AMG (Analog Manufaktur Germany). The AMG brand was created with collaboration between a German family’s precision manufacturing facility and a group of audio industry experts to advance the art of vinyl playback.

Werner Roeschlau, his son Julian Lorenzi and other master machinists developed their first turntable in 2009 at their bespoke multi-story Bavarian factory located north of Munich in Kelheim, near the Donar (Danube) river. Their factory had been manufacturing precision parts for many German turntable companies for over a decade and prior to that, parts for the aerospace industry. Werner’s background was as a tool and die maker as well as a commercial pilot for Lufthansa. After retiring from Lufthansa, he spent many years in the United States, both in Washington and Texas, involved with aircraft development.

Their small 3 story factory, built in an older building, combined the latest Computer Aided Design and CNC machines with “classic analog” tools, including custom lathes and drill presses. This expertise in the design and manufacture of turntables led to the original Viella turntable with 12” tonearm under the family name of Roeschlau-Lorenzi, first exhibited at the Munch High End Show in 2010.

After seeing and hearing this original Viella at the 2011 Munich High End Show, Garth Leerer of Musical Surroundings told Gerald Jakob of High Fidelity Studio they should visit the factory and meet this family. Musical Surroundings and High Fidelity Studio had worked together since the 1990s, manufacturing and distributing turntable and analog products in the US and Germany, including Benz Micro phono cartridges from Switzerland. Throughout this long period of collaboration, Leerer was surprised to learn that Germany, a country with a long history in turntables, lacked its own definitive turntable brand, instead recognizing a Scottish turntable brand Linn as the top performer. In July 2011, they met the family at their factory in Denning and were immediately impressed by the products and this father/son team.

At this meeting, all parties agreed to work together, and the foundation was laid for the company known as AMG, Analog Manufaktur Germany. The goal was a world-class turntable built with the highest level of precision that was affordable to serious audiophiles. Work began on further product development and refinement, including updated electronics for the turntable motor controller, adding azimuth adjustability for the ingenious 12” tonearm, and cost efficiencies targeting armboard interface as well as ergonomics. Additional audio industry experts were brought in including George Cardas, who designed a line of tonearm cables, and Mike Latvis of Harmonic Resolution Systems (HRS) who designed dedicated isolation bases.

In October 2011, Leerer brought the first AMG Viella 12 turntable to San Diego, California where professional photographer Ken West, captured the essence of the products’ design, precision, and aesthetics. These images would later go viral in design and luxury websites, catapulting AMG on the world stage.

AMG made its official debut at the 2012 International Consumer Electronics Show (CES) in Las Vegas, where the Viella 12 (or AMG V12 as it was called) caught the attention of the audio press, distributors, dealers, and audiophiles. In May 2012, AMG and the V12 made its debut at the High End Show in Munich with the buzz building to a crescendo. Top German audiophile magazines including STEREO and IMAGE HI-FI requested review samples for testing.

As its reputation grew, the V12 was recognized by the German mainstream and luxury media such as Der Spiegel and BMW Eklusiv Magazine as a hallmark of German industrial design and manufacturing. After testing and listening, the worldwide audiophile press praised the V12 and it was rated as one of the top turntables in both Germany and the United States. In a very short period of time, a German turntable brand was recognized in its country of origin as being the finest available.

Werner and Julian had also created a 9” tonearm based on their patent-pending design. It was decided to create 2 versions, 1 specifically for the Linn turntable. Thee were also CAD drawings of a smaller turntable named Giro that could use the 9” tonearm. The idea of expanding the line spawned the idea of creating an AMG moving coil cartridge and prototyping began.

The AMG 9” tonearm was debuted at the CES show in January 2013 but then tragedy struck the following month. Werner passed from a heart attack in late February 2013. Julian Lorenzi, after years of experience working closely with his father, combined with his education and background, became Managing Director of AMG. He traveled to New York to present the V12 to Michael Fremer of Stereophile where it became a Class A Recommended Component.
At the Munich High End Show in May 2013, Julian Lorenzi accepted the Image Hi-Fi award for the AMG 12JT as the top tonearm on behalf of his father.

Julian dove deeply into realizing the Giro turntable and continued to work on the Teatro cartridge. It was decided that the Teatro cartridge body be machined from Titanium for its light weight, strength, and superior sonic characteristics. The AMG factory was expert at machining both aluminum and stainless steel, thus they turned to an advanced aerospace contractor to Boeing based in Washington State. Understanding the need to use the leading experts in their specific field, AMG engaged industry leading companies in Japan for the Teatro micro-ridge stylus, generator, final assembly and quality control.

In July 2013, Leerer visited Denning with Thomas Kaczmarek, the other principal of High Fidelity Studio for another round of product development. At that meeting, the Twin armboard was conceived to use both the 12J2 and 9W2 tonearms on the Viella. This was in response to the growing popularity of audiophiles using multiple tonearms with different cartridges, often one featuring a mono cartridge for playing re-releases of classic jazz and rock music from the 1950s and 1960s.

In just over 3 years, AMG had grown from the V12 to a larger product selection and increased its distribution around the globe. In Spring 2015, Julian opened a brand new factory in Deining, 50km from Nuremberg, to meet growing demand, closing the old location. This new factory was purpose built for turntable and tonearm production, located closer to AMG’s key vendors, the aluminum anodizer and wood skirt producer, and Julian’s home and family. 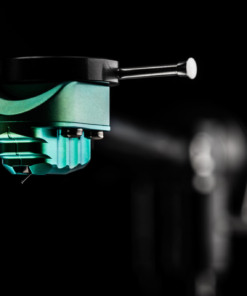 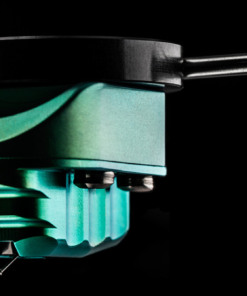 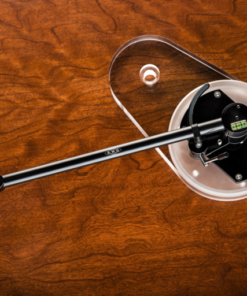 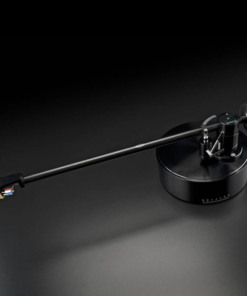 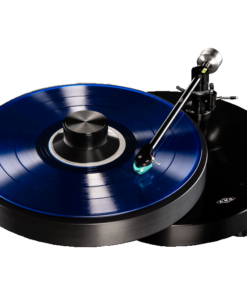 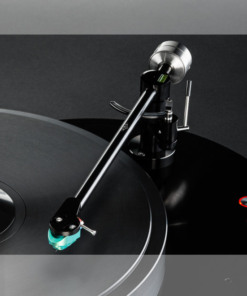 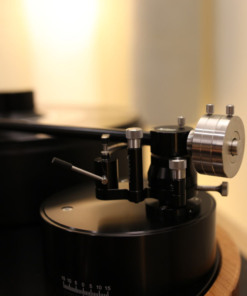 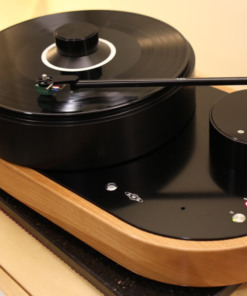 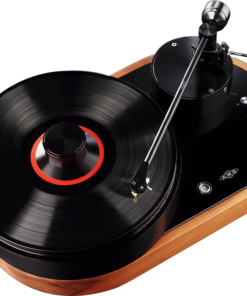 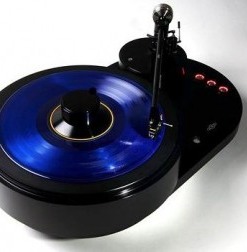 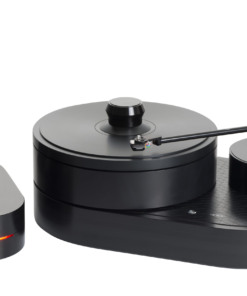 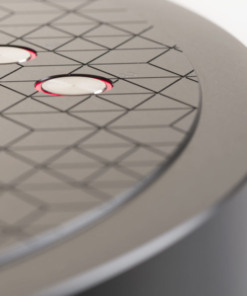