MC step-up transformers and MC cartridges containing an iron core are magnetized due to long years of use and various causes. When magnetized, a magnetic bias is applied and the operating point gets off position causing distortion in the music signal that is being played and deterioration of the sound quality. In order to restore the original sound quality of a product, the magnetized magnetism must be removed.

By using our knowledge of producing MC step-up transformers and iron core MC cartridges, Phasemation will release the DG-100 which is the best for degaussing.

If iron core MC cartridges are used for a long period of time, the spool of magnetic material winded with coil in the magnetic circuit formed by 2 yokes and a magnet will become magnetized.

Magnetism on the MC Step-Up Transformer 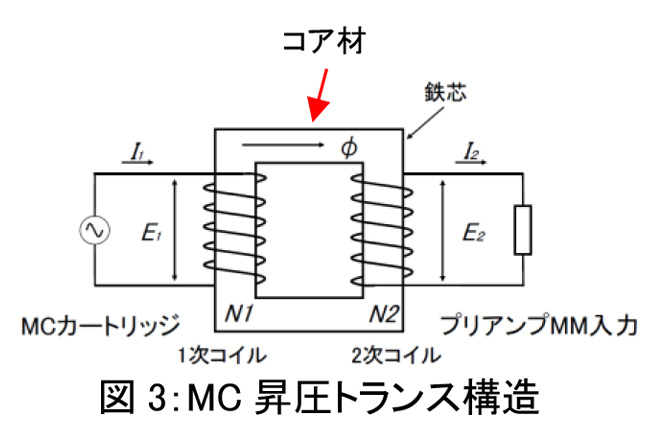 The Principle of Degaussing

A sine wave of 440Hz is applied to the MC step-up transformer or to the iron core MC cartridge and the signal is exponentially decreased for 20 seconds as shown in Figure 4. In other words, the spool frame and the core of the magnetic material degausses by making the magnetic field gradually smaller and getting closer to “0”.

This effect will increase the resolution at a micro level and produce a clearer sound. The MC step-up transformer can also be degaussed.

Connect this unit’s LINE OUT to the RCA input terminal of the MC step-up transformer or to the RCA plug of the record player, turn on the power by pressing the POWER button, press the START button and then degaussing will be completed in about 20 seconds.

When To Exchange the Battery

If the illumination around the POWER button has darkened, it is a sign that the battery amount is low. Please exchange to a new battery as soon as possible. If the empty battery is left remained, liquid may leak out and will lead to damaging the unit.