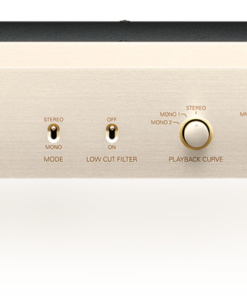 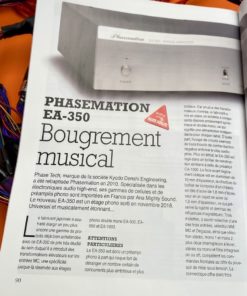 Phasemation describes the EA-350 phono stage as “an all discreet, all step symmetric non-feedback phono amplifier that supports balance inputs and draws out the music’s reality and the artist’s passion.”

Category: Phono stages Tags: MC, MM, phono Brand: Phasemation
Phasemation describes the EA-350 phono stage as “an all discreet, all step symmetric non-feedback phono amplifier that supports balance inputs and draws out the music’s reality and the artist’s passion.”
When we received the EA-350 : we immediately knew that we had a fantastic phono stage and Haute-Fidélité review of December 2019 did confirm it with a “Best Buy of the Month” award and concludes with these words :
“With the EA-350, Phasemation has a built a fantastically universal and musical phonostage. In an objective way, this phono stage uses interesting technical solutions with an excellent building quality. Possibilities of cartridges association and different settings allow the EA-350 to be extremely versatile in any configurations, MM or MC, stereo or mono. Last but not least, it’s way of reproducing music is one of the most realist and charming that we ever had the chance to listen in a phonostage at such a price tag. Recommended.”

An all discreet, all step symmetric non-feedback phono amplifier that supports balance inputs and draws out the music’s reality and the artist’s passion

Having in mind that “analogs too have a lot more to go,” we expanded the product line-up of EA-1000, EA-500, EA-300, EA-200 and phono amplifiers due to non-feedback circuits for lovers of analog discs.

This time as the product to be a touchstone of a semiconductor phono amplifier, we brushed up all of the functions from the interior MC transformer to the circuits of EA-350

I. Inside is an MC transformer for balancing which is accomplished the first time for this class

Three input terminals are equipped and MM/MC switching is possible for each. (Inputs 1 and 2 support balanced inputs)

II. A 10mm thick aluminum material is used on the front panel and the chassis is elegant and strong and it is structured following the designs of CA-1000 and T-2000.

In addition, the elegant designs of CA-1000 and T-2000 are adopted and the played sound can be enjoyed with elegance, overwhelming realism, a panoramic stage, high resolution, and high S/N.

The negative feedback amplifier which is the mainstream of modern amplifiers constantly compares the input and output signals for both the semiconductor and vacuum tube and this difference can be amplified with high precision at low cost because it is amplified as an input signal. However, there is a time delay between the input and output signals which cannot be solved theoretically and this generates a TIM distortion and the like and this is a big reason why sound satisfaction cannot be attained from negative feedback amplifiers.

On the power circuits