Throughout the years, we have established a strong connection with the eastern part of France, Alsace. Even though Covid19 had some of the most important clusters in France, we took our chances and decided to maintain our trip. We had established camp in Strasbourg, on Thursday 12th of March evening, at Philippe’s place where we set up what seems to become a classical combination for Ana Mighty Sound :

But we will come back to this set-up later on as on Friday morning we had a long day as we had to meet with three new customers who all shared the same need to discover our analog solutions.

A. Gilles and the Phasemation PP-500 MC cartridge 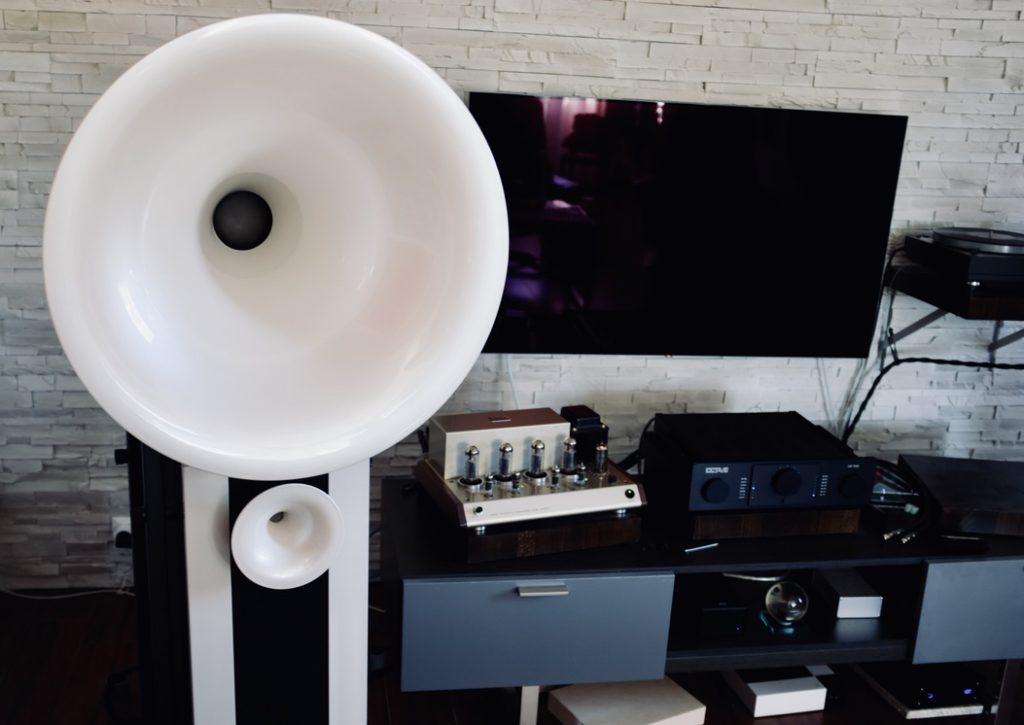 Our first visit was with Gilles who owns some nice Avant Garde Duo G2 with an Octave preamp and Leben power amp. His turntable is a very special Thorens TD-160 fully reworked by Rold Kelch (the rebuilder of Thorens Referenz…) with Acos Lustre GT1 tonearm and Ortofon Kontrapunkt A MC cartridge. 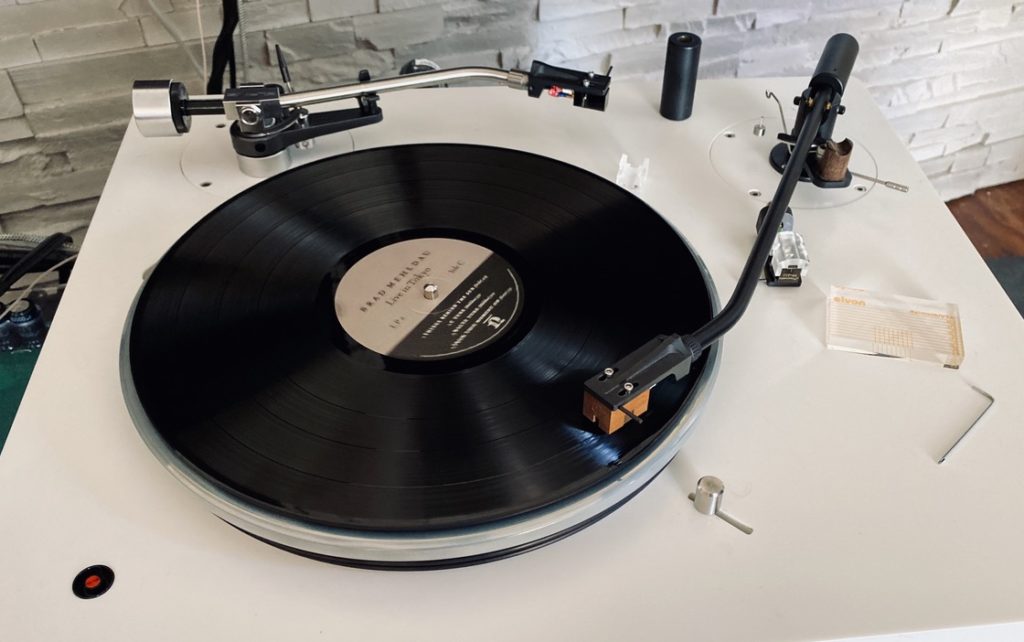 In order to define quickly the needs of our customer in terms of cartridges, we use a PTP Audio Solid 9+12 turntable equipped with two arms : Schick 12” and Glanz MH-9B. Both tonearm allow removable headshells and thus allow fast changement of cartridges. In this configuration : you can compare a wide array of cartridges with a medium mass tonearm (the Schick) and heavy mass tonearm (the Glanz). First idea of Gilles was to go for one of our refurbished Koetsu cartridges, it turned out that he finally opted for a Phasemation PP-500 with matching CS-1000 headshell, even though the Mutech Hayabusa was certainly the cartridge he preferred but alas off budget. 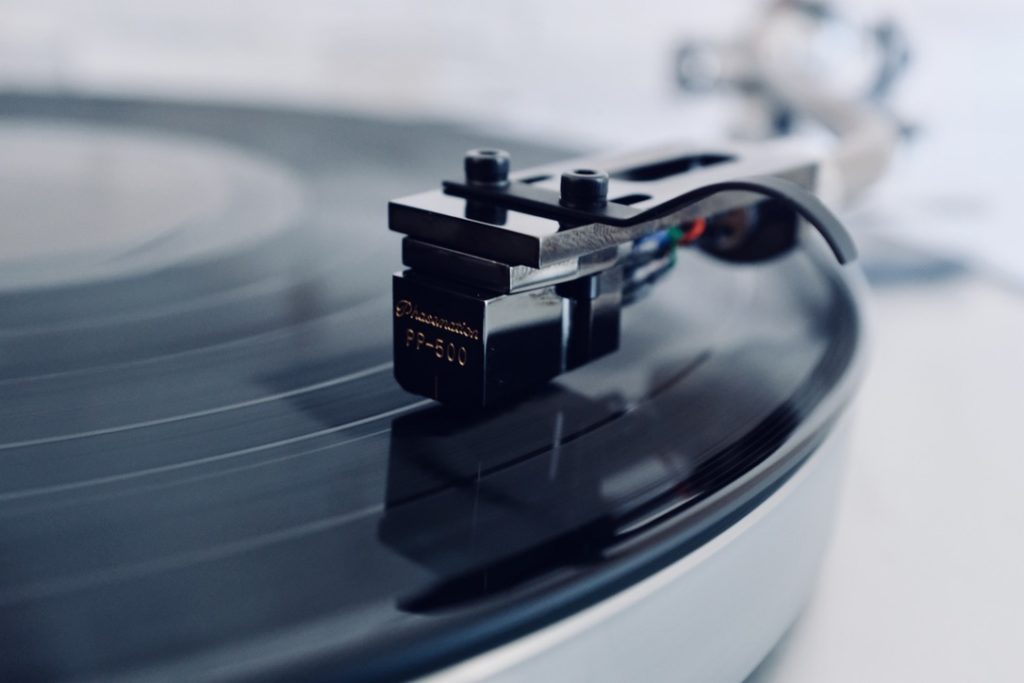 By discovering the PTP Solid 9 + 12 solution, Gilles is now also thinking about changing his actual arm for a Glanz MH-9B or a Schröder n°2 FW. Both tonearms will complement very well the Phasemation PP-500 and will be also a fantastic basis to later make his turntable evolve.

B. Jean-Marie and the Koetsu Rosewood, SME 3012 and Ortofon SPU Gold rework 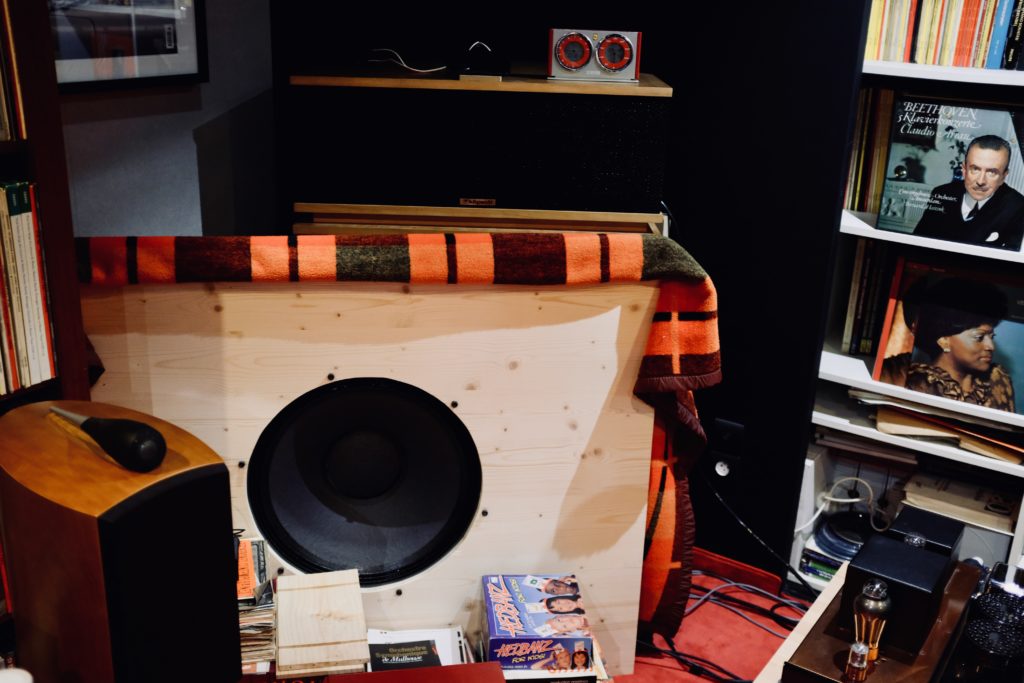 We than visited Jean-Marie, who owns a very particular set-up using Klipschorn speakers with 56cm open baffle bass woofers and external tweeters. These speakers are using active filter with (among other things) Quest or Conquest Audio Note power amps. Preamp is the mighty EAR Yoshino 912 which is also used as phonostage. As a turntable ? The La Platine turntable from Verdier with magnetic suspension bearing combined with two SME arms, one 3012 mk1 and M2-12R. Both arms have been externally rewired. The 3012 mk1 has an Ortofon SPU Gold while the M2-12R a Denon DL-103M. 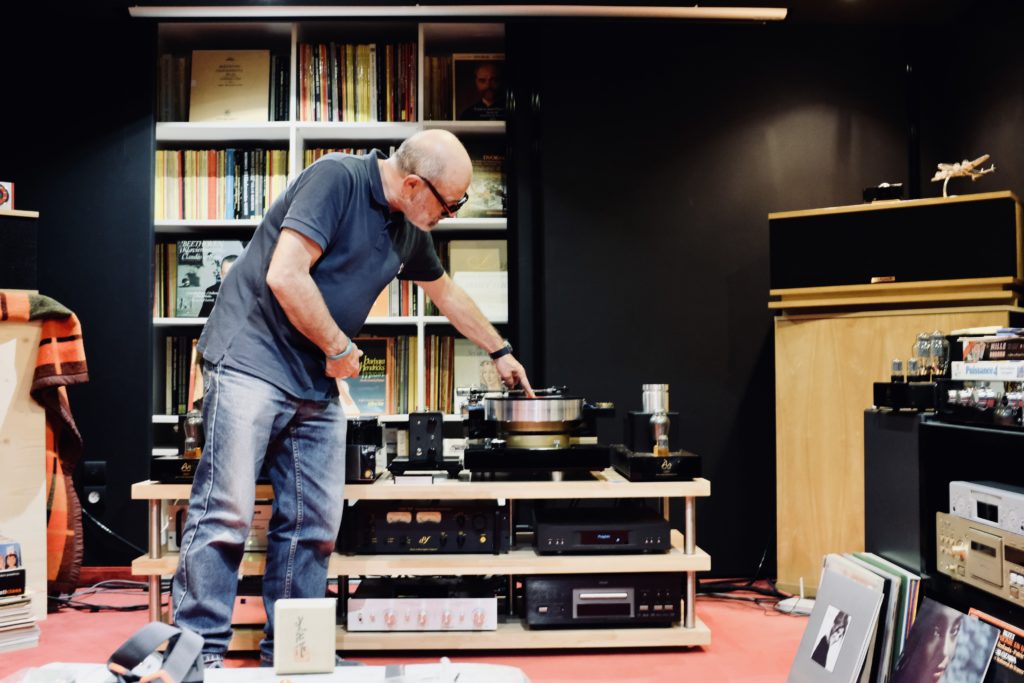 Before presenting anything in this analog rig we had to completely rework the implementations of both tonearm and assess their states. SME 3012 mk1 was in need of a serious rebuild as the external wiring used too thick wires prevent a free 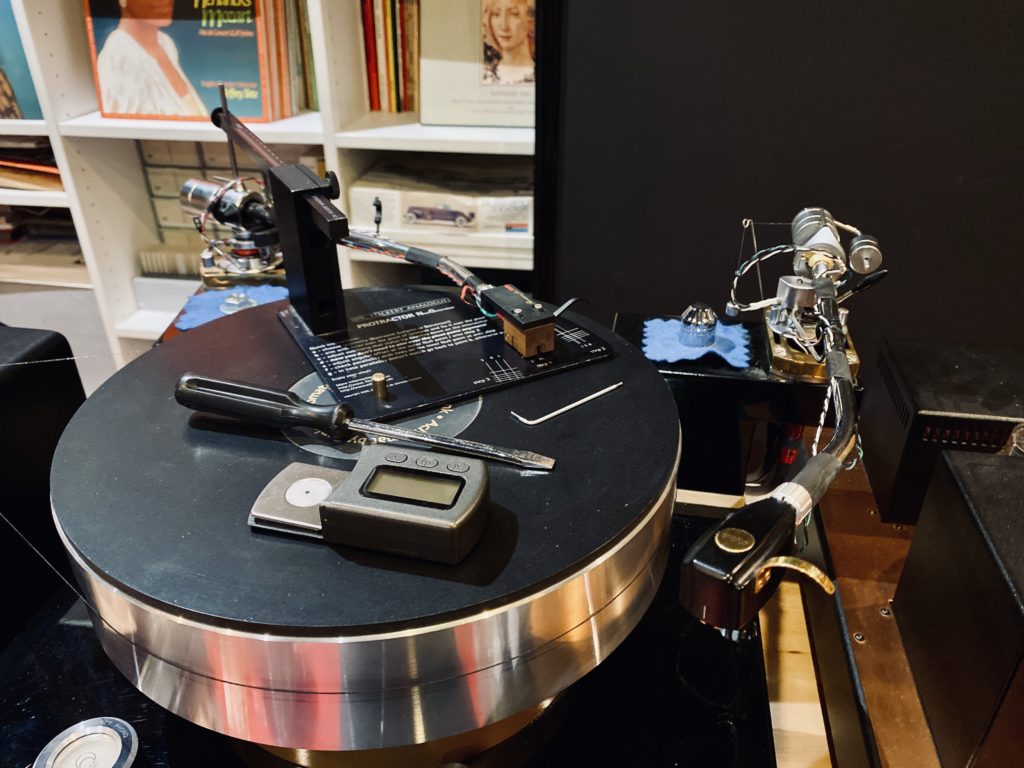 movement of the tonearms, other parts of the arm was loose (including knife fixation), some good reasons for us to bring it back with us for full rebuild as well as the Ortofon SPU Gold which showed some serious signs of bad treatments (including direct soldering on the pins of the tonearm wires with massive solder blobs..) 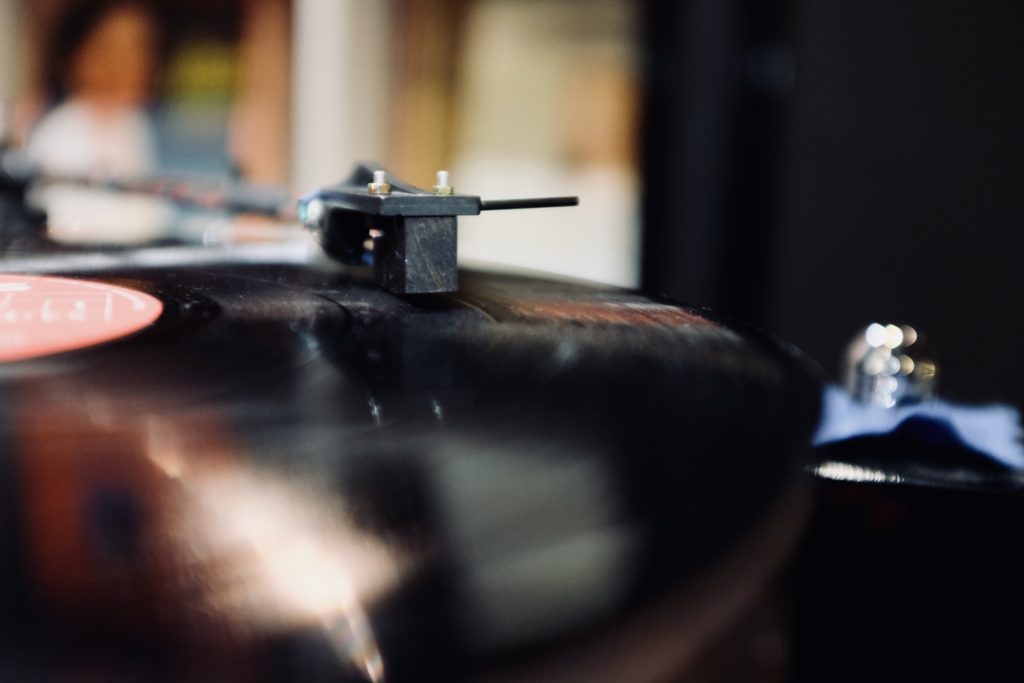 The M2-12R was in overall better condition and allowed us to present a few cartridges to Jean-Marie. This time the Koetsu Rosewood standard found a new home, for Jean-Marie it exhibited the same qualities as his Ortofon SPU Gold but with better details and more bandwidth extension. Jean-Marie is now wondering about what should be his next step for a tonearm : Schröder CB-L or BA, Glanz MH-124D and what about a high performance cartridge ? More reasons to come back and visit him ! 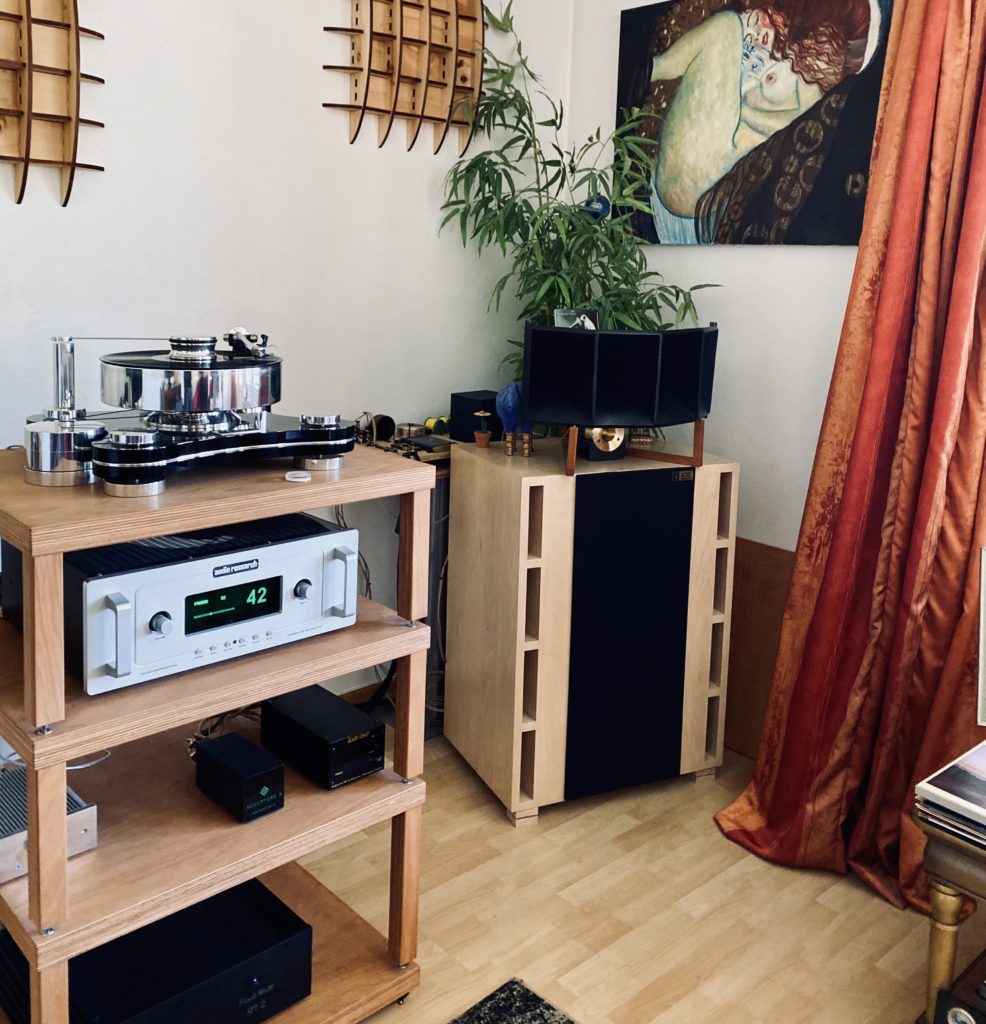 Last stop of the day with Bernard which has also an amazing set-up using Petite Onken with Altec 414-8B woofers , 808D compression unit on Jacques Ledauphin multicellular horn and Fostex T-500 tweeter. 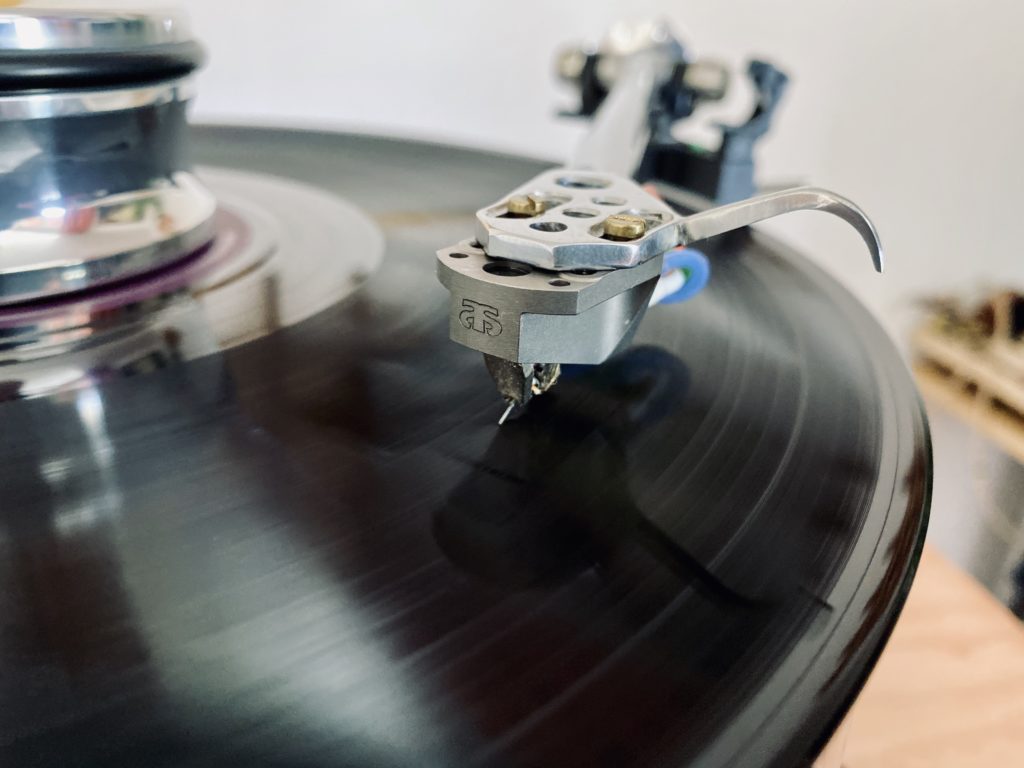 Our first step was to introduce our own Sculpture A Mini Nano Step-Up. The right choice of step-up was established with a 1:15 ratio. Comparison with EAR step-up immediately convinced Bernard to stick to Sculpture A. To replace the Transrotor Cantare MC cartridge, which is based on a Goldring design, we immediately thought about the Acoustical System Arch MoMC cartridge which also shares some common ressemblance with Goldring cartridges. This particular cartridge had been previously completely rebuilt by us with boron cantilever and shibata tip as well as silver coils. To test the abilities of the cartridge Bernard chose to listen to the last movement of the 8th symphony from Mahler. His choice was made instantaneously…

A nice Friday in Alsace indeed… but it was not all ! 😉